When speaking of the lovely neighborhood of Swissvale, the first thing that comes into the discussion is safety (ok, another is the school district) but rarely accessibility (with the I-376 or the direct street to Squirrel Hill) or the proximity to Regent Square area (without having to deal with congested traffic or potential noise). It seems that there was a general opinion to consider Swissvale as an unsafe neighborhood and many folks recommend not to walk around and just drive. Being a newcomer in the area, my first thought was to follow what the existing residents say and follow their recommendations. This is one of the reason I previously followed the Swissvale Crime Watch group: my concern was to learn more about how to stay safe in my neighborhood. Coming from Squirrel Hill (and previously Shadyside), neighborhood considered as very safe, I wanted to learn more about safety concerns in the area.

For various reasons, I needed data about crime in Swissvale. At first, I was expecting to find a lot of crimes reports. Unfortunately, I was surprised that my neighborhood was in the average and even better in some cases. Let's have a look at the numbers.

Let's have a look at the following map found on city-data.

When looking at the numbers, Swissvale has a crime rate of 320 (within the average rate) whereas Pittsburgh has a index of 358. One can argue that the Pittsburgh district also includes some unsafe neighborhood but on the overall, this is just surprising. Also, another argument would be to deny these results on the fact that these data might be outdated or not reliable. So, I try to get other statistics and ended up on the neighborhoodscout website that reports the number of crimes per 1000 residents. 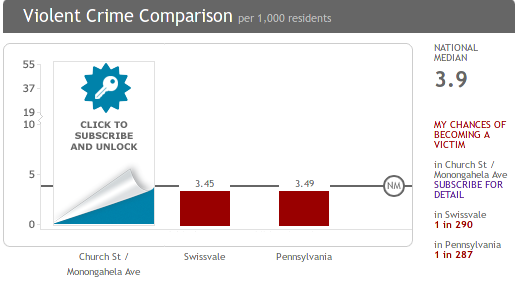 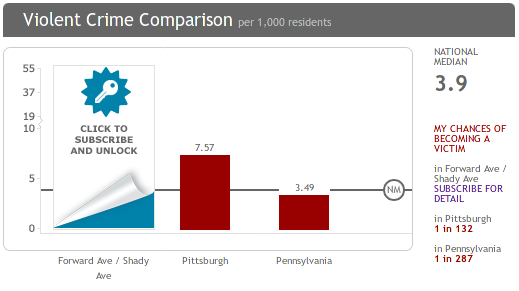 When looking at this numbers, it seems that Swissvale is also doing better than Pittsburgh overall. Other data might contradict this fact, such as the number of crime per square miles, but this is less reliable and useful since we live in the city and numbers for the state includes also the country side.

What is the meaning of all these metrics? Does it mean that Swissvale is very safe and you will not experience any issue? Definitively not. Common sense still applies whenever you go and you can get trouble anywhere. This data just shows that Swissvale is not more dangerous than most parts of Pittsburgh and probably even safer than some well-know active neighborhood. It probably shows that the general opinion to see Swissvale as an unsafe neighborhood is not so legit as we might think. And this is definitively a nice place to live. Hope this few statistics may defuse some established ideas and encourage people to come and visit this fantastic part of Pittsburgh.